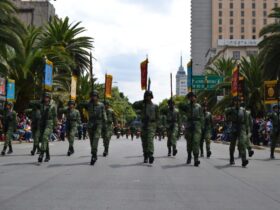 Of the 50.5 million women in Mexico aged 15 and older, over 70% have suffered violence at least once in their lifetime, and sexual violence is prevalent in the lives of one out of every two women in the country.

The National Survey on the Dynamics of Relationships in Households (ENDIREH 2021) was published this Tuesday, shedding light on the grim reality women in Mexico must endure.

The violent conditions woven into Mexican society have ranked the Latin American country as one of the most dangerous for women worldwide, with different international human rights organizations denouncing the widespread violence.

In gender-related homicides of women, Mexico has registered 530 femicides in the first seven months of 2022, a slight decrease from the 589 reported in 2021 during the same period.

To date, the figure of 10 women killed every day is commonplace in Mexico, which has pushed human rights and feminist organizations to demand direct government action and decisive policies to stop the ongoing violence.

In turn, the government has provided some legal framework to combat gender-related violence, which some argue is insufficient.

Feminist organizations such as EQUIS: Justice for Women have argued that bills like The General Law on Women’s Access to a Life Free from Violence, first enacted in 2007 and last amended in April 2022, have been limited to informative practices with little to no effect on violence.

According to their report on preventing violence against women, the General Law on Women’s Access to a Life Free from Violence focuses solely on preemptive measures such as awareness-raising, campaign design, promotion, or communication.

Furthermore, public programs like the Comprehensive Program to Prevent, Address, Punish, and Eradicate Violence against Women (PIPASEV) are again, limited to campaigns that discourage violence against women, leaving behind other actions to improve the material conditions to ensure women’s safety.

The low reach of these policies and lack of direct actions to protect women has translated into an increase in widespread violence against women, according to the ENDIREH.

According to the report, Mexico experienced an increase in overall violence in the past five years, regardless of policy making and the recent change in administration.

The study shows that violence against women increased by 4% since 2016, sexual violence, in contrast, increased by 8.4%.