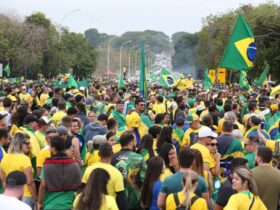 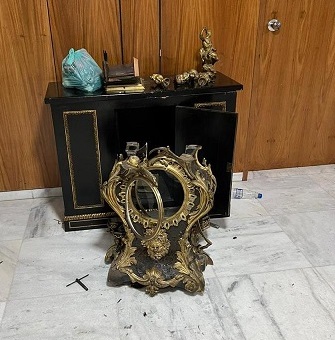 São Paulo, Brazil – In the days following Sunday’s assault on Brazil’s government headquarters by supporters of former President Jair Bolsonaro, authorities are taking stock of the damage. Among the wreckage are valuable works of art, antique furniture and gifts to Brazil from foreign governments.

Insurrectionists breached the barriers surrounding the government headquarters in the capital city of Brasília and laid an hours-long siege to government offices including the Supreme Court, Congress and the Planalto Palace, the official workplace of the president. None of the offices were in session when the mob broke in.

At the Planalto Palace, vandals destroyed important artistic and architectural works of art, and although a detailed survey of the damage hasn’t been fully carried out, a preliminary assessment has already identified damage to iconic pieces.

One such piece is the painting “Mulatas,” by the famous Brazilian painter Di Cavalcanti. Valued at R$ 8 million (USD $1.6 million), the piece was reportedly torn at seven different points. One bronze and one wooden sculpture were also completely destroyed according to the government.

It has also been reported that the president’s gallery inside the Planalto Palace has been completely destroyed, all of the photos having been torn from the walls.

A work table belonging to former President Juscelino Kubitschek, who was responsible for building the capital  Brasília in the 1950s, was reportedly used as a barricade by insurrectionists. A full assessment of the damage to the table is still pending.

Found floating in a pool of water after vandals flooded an entire floor by opening fire hydrants was “Bandeira do Brasil” (Flag of Brazil), a 1995 painting by Brazilian artist Jorge Eduardo, which served as a backdrop for speeches by many Brazilian heads of state.

In addition to the president’s office, damage was also reported in rooms that house Brazil’s ministries.

Balthazar Martinot’s 17th-century clock was a gift from the French Court to Emperor Dom João VI, who ruled Portugal, Brazil and the Algarves from 1816 to 1825.

Martinot was the watchmaker for Louis XIV, and there are reportedly only two of these watches in the world today. The other is on display at the Palace of Versailles, but it is half the size of the piece that was housed in Brazil’s government building.

Martinot’s famed clock was completely destroyed by the vandals.

The Curator for the Planalto Palace, Rogério Carvalho, said it will be “very difficult” to restore the Martinot clock, but he is hopeful that other works can be restored.

“The value of what was destroyed is incalculable because of the history it represents. The collection represents all presidents. This is its historical value,” said Carvalho. “From an artistic point of view, Planalto certainly brings together one of the most important collections in the country, especially of Brazilian modernism.”

Damage in Congress and the Supreme Court

The two other government buildings damaged in the assault, Congress and the Supreme Court, have yet to announce damage to their assets. A preliminary report shows losses of more than R$ 3 million (USD $600,000) in Congress.

The buildings were inspected on Monday by Federal Police. According to reports the Supreme Court suffered the most damage of all the buildings.

The plenary room, where Brazil’s 11 highest justices hold court, was completely destroyed, as well as the office of the president of the Supreme Court.

The Salão Nobre, an elegant chamber in the Court adorned with furniture from the 1870s that is used for meetings with foreign dignitaries, was also damaged.

In Congress, the coup plotters managed to invade the plenary rooms of the Chamber of Deputies (Brazil’s lower house), and Senate, even reaching the reception room for the Senate president.

Brazil’s Museum of Congress, with works of art and gifts from other nations, was invaded and at least 40 pieces were reportedly stolen.

According to Minister of Justice Flávio Dino, authorities are carrying out forensic investigations to hold those responsible for Sunday’s terrorist attack on government offices accountable.

“In addition to criminal punishment, we are also going to ask for compensation to repair the damaged property,” Dino said.