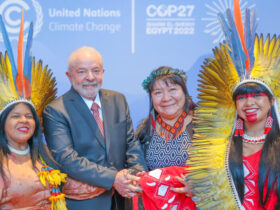 A new survey released by Datafolha Institute last Thursday revealed a downward trend in the advantage that former president Luiz Inácio Lula da Silva maintains over the current head of the Brazilian government, Jair Bolsonaro ahead of elections in October.

According to the survey, “Lula,” from the Workers’ Party, registered 45% of the voting intentions, two percentage points lower than he received in a previous poll released on August 18. Mr. Bolsonaro maintained a rate of 32% of voting intentions in both polls.

Lula’s numbers have dropped since the first Datafolha poll was released on May 26, when he held 48% of voting intentions for those surveyed.

President Bolsonaro of the  Liberal Party, on the other hand, has seen an upswing in the polls, having received only 27% of voting intentions in the May poll.

From May to August, the Bolsonaro government expanded its efforts to attract lower income voters who’ve traditionally supported Lula.

Brazilian candidates were officially aloud to begin campaigning starting on August 16, and with campaigns in full swing, TV and radio waves and social media are replete with political propaganda.

Last week also marked the first official presidential debate. Senator Simone Tebet, a third party candidate from the Brazilian Democratic Movement (MDB) party, stole the show on debate night for undecided voters, and the performance boosted her slightly in the polls, rising from 2% of voting intentions in the August 18 poll to 5% in this most recent voter survey.

Ciro Gomes, a career politician and a former Minister of Finance from the Democratic Labour Party (PDT), also saw a small boost in the polls rising from 7% in the August 18 poll to 9% in this most recent survey.

Brazilians will go to the polls to vote for their new president on October 2. Political analysts expect to see a two-horse race between Lula and Bolsonaro.