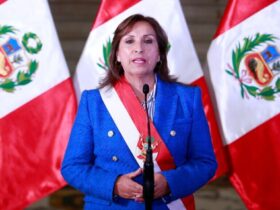 Arista had previously worked for just three days as the head of Intelligence of the Ministry of the Interior (Digimin) during the administration of ousted President Pedro Castillo. At the time, he explained that there was political interference in his work.

He has also been a police general in the regions of Junín and Huancavelica, in the south of the country.

His appointment was signed on January 5 by President Boluarte and Prime Minister Alberto Otárola.

On Thursday morning, during an interview with RPP, Boluarte referred to the reasons why she withdrew Liendo’s trust as head of DINI.

She revealed having received “biased” information from the intelligence service. According to this information, all the people who participated in the protests throughout the country since December were described as “terrorists.”

“We have to look inside the situation of the protests. We cannot say that everyone is a terrorist, you have to be extremely careful,” she said.

Boluarte noted that the vast majority of protesting Peruvians have reasonable demands. However, she believes that there is a minority linked “to drug trafficking and illegal mining,” and other people linked to terrorism that provoke violence in demonstrations.

Since Boluarte, the former vice president, assumed the presidency, protests have turned violent, leaving 47 people dead and more than 600 injured.

Protesters are demanding the shutdown of congress and new elections after the impeachment of former President Castillo, who is serving pretrial detention for charges of conspiracy and rebellion.

Some groups are also calling for the release of the ex-president, local media reported.

Boluarte’s government declared a state of emergency throughout the country on December 14, limiting some basic civilian rights and allowing the National Police to maintain control of national security, with the support of the army.