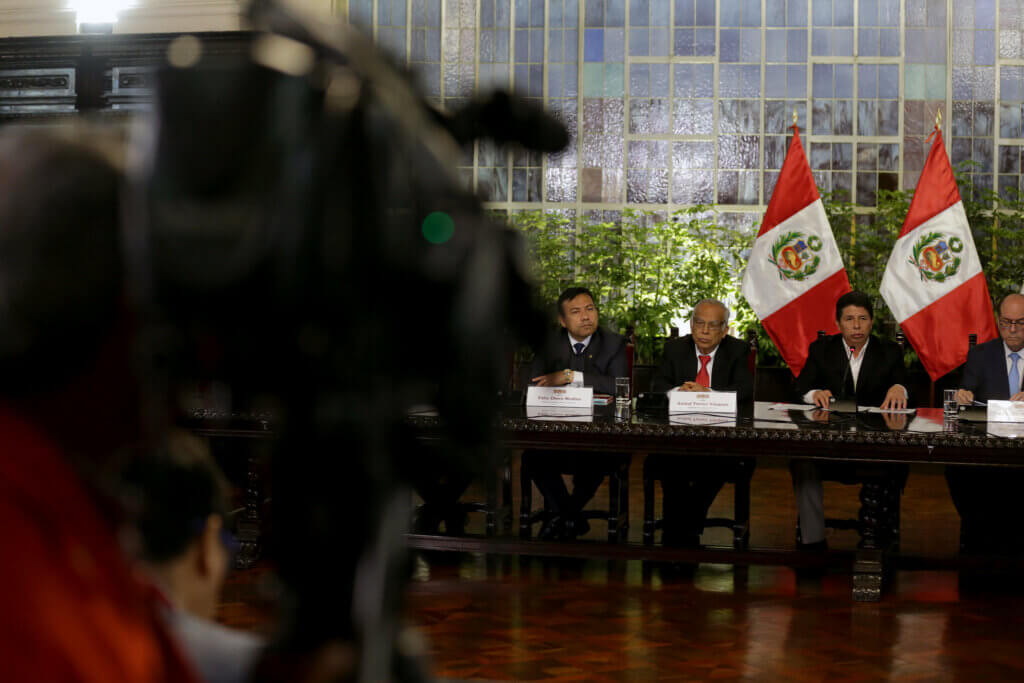 Local journalists protested at Peru’s Presidential Palace after the government allowed only foreign media to attend a press conference.

At the press conference on October 11, President Pedro Catillo responded to a complaint filed by attorney general Patricia Benavides against him on conspiracy, influence peddling and collusion charges.

The Peruvian reporters were locked inside a room without anyone giving them information about the conference.

“As they closed the door in our faces, we protested: we placed the video cameras, camera lenses, and microphones of all the national media on the floor,” said Hellen Meniz, a reporter for RPP Noticias.

On October 12, Prime Minister Aníbal Torres refused to apologize to the Peruvian media, saying that the ban was because “the international press had demanded an exclusive press conference.”

“It is not true that APEP has requested ‘exclusivity’, as the government spokesman claimed,” according to the statement.

APEP added that the organization asked the Government to allow national journalists to enter the conference.

Justice Minister Félix Chero responded that the government would organize an event only for local reporters later in the day, which never happened.

“This arrogant and discriminatory treatment against the country’s journalists only ratifies the anti-democratic nature of the government that pretends to hide behind silence to prevent citizens from being informed,” said the organization.

“What happened today is a serious attack against the information of the Peruvian people. President Pedro Castillo must answer questions from the press; it is a citizen’s right to be informed,” they wrote.

Mr. Castillo is involved in six open investigations for allegedly leading a corruption network and other crimes, and has survived two impeachment attempts in just over a year in office.

The constitutional complaint filed by Ms. Benavides is now in the hands of Congress. The document will have to go through several stages before a possible suspension of the presidential mandate can be voted on in a plenary session. Once the mandate is suspended, Mr. Castillo could be tried as an ordinary citizen for crimes he is accused of committing.