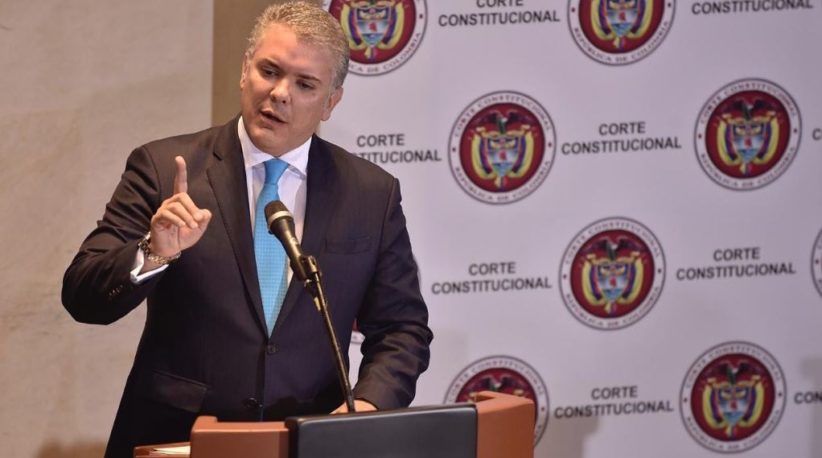 “Together… we will be able to reform and design a Special Jurisdiction for Peace (JEP) that ensures genuine truth, genuine justice, genuine reparations and genuine non-repetition for all Colombians,” Colombian President Iván Duque tweeted on the evening of Sunday, March 10.

The JEP, a 51-member peace tribunal, was created on the demands of the 2016 Colombian Peace Accord and begun work in January 2018. Its intention is to conduct special trials outside of Colombia’s regular justice system for military officials and ex-FARC rebels who committed crimes during Colombia’s half century-long armed conflict.

During his term as senator and throughout his electoral campaign, Duque repeatedly articulated his stance on the Peace Agreement, as well as his objections to the JEP’s approach towards those who committed war crimes.

For “reasons of inconvenience,” Duque has now objected to six of the 159 articles that make up the JEP statutory law, outlining three specific improvements he would like to see implemented. The bill has now been returned to congress despite warnings from Colombia’s International Criminal Court.

Despite no inclusion of the original bill in his official statements, here’s which articles Duque’s administration has objected to and why:

Article 7 – President Duque has stated that this article is not clear enough on its detailing of the perpetrators’ obligations to make reparations to victims. He believes it to be a priority that the perpetrators carry out satisfactory material reparations with their assets.

3rd Paragraph of section j) of Article 79 – Duque insists on a better definition of when, and under which circumstances, ongoing investigations into war criminals taking place in Colombia’s regular courts will be suspended and moved over to the JEP. According to Duque, “this will avoid suspicions of impunity.”

2nd Paragraph of Article 19 – Duque does not want to withdraw the Colombian state’s right to impose no judicial time limit on investigations of justice and truth in cases of crimes against humanity, genocide or war crimes.

Article 150 – Duque wants the JEP bill to clarify what it means when it states that the Court Review Tribunals cannot exercise evidence procedures in relation to the extradition of people who have committed crimes after the Peace Agreement was signed.

Article 153 –  Duque objects to this article, arguing that the extradition of people who are offering to tell the truth does not have a time limit. Not establishing a set time frame to stand before the JEP, Duque says, could produce perverse incentives, for example, to postpone truth hearings before the JEP in order to avoid extradition.

Duque has also stipulated that Congress make three main improvements to the JEP bill. He insists that those who have committed sexual crimes against minors throughout Colombia’s armed conflict should not be tried before the JEP and instead in the country’s regular courts. Besides this, he also wishes to clarify that if anyone decides to reoffend, they will lose the benefits of the transitional justice system. Lastly, that any criminal act committed after the signing of the 2016 Peace Accord will be tried in the country’s regular criminal justice system as opposed to the JEP.

Given that the JEP transitional justice system had already been approved by both Congress and the Constitutional Court, Duque’s amendments have generated backlash from those who fear that he could be putting its future at risk.

In a letter to the United Nations Secretary General sent Monday, March 11, both Humberto de la Calle (ex-government chief negotiator with the FARC) and Rodrigo Londoño (ex-FARC leader and current president of the FARC political party), along with 100 members of the government negotiation team for peace talks, detailed their grievances.

“We express our profound concern for the attempts to gravely harm the implementation of the Peace Accord as well as the structure and operation of the JEP,” they wrote.

Human Rights Watch Americas director also stressed his unease with the partial JEP veto, claiming it “will probably delay judicial proceedings, undermining the same accountability which it has the stated purpose of promoting.”

“In the face of President Duque’s objections to the statutory bill of the JEP, we are reminded of the importance of cross-sector unity in defence of the JEP,” wrote non-partisan transnational initiative Rodeemos el Dialogo in a communique published on March 12. The UK-based initiative also called on the international community to support peacebuilding in Colombia.

The JEP statutory bill will now be returned to Congress, who will decide whether or not to accept Duque’s alterations. Meanwhile, the JEP will continue to run normally, assured director Patricia Linares Prieto.

“A stable and long-lasting peace is our goal,” she said.

Having worked in newsrooms in both Bogotá and Rio de Janeiro, Sophie is a British journalist now based in Medellín and writing for Latin America Reports. She is interested in post-conflict Colombia, historical memory and transitional justice in Latin America. Her work has also been published by Al Jazeera English, World Politics Review, El Tiempo and O Globo.