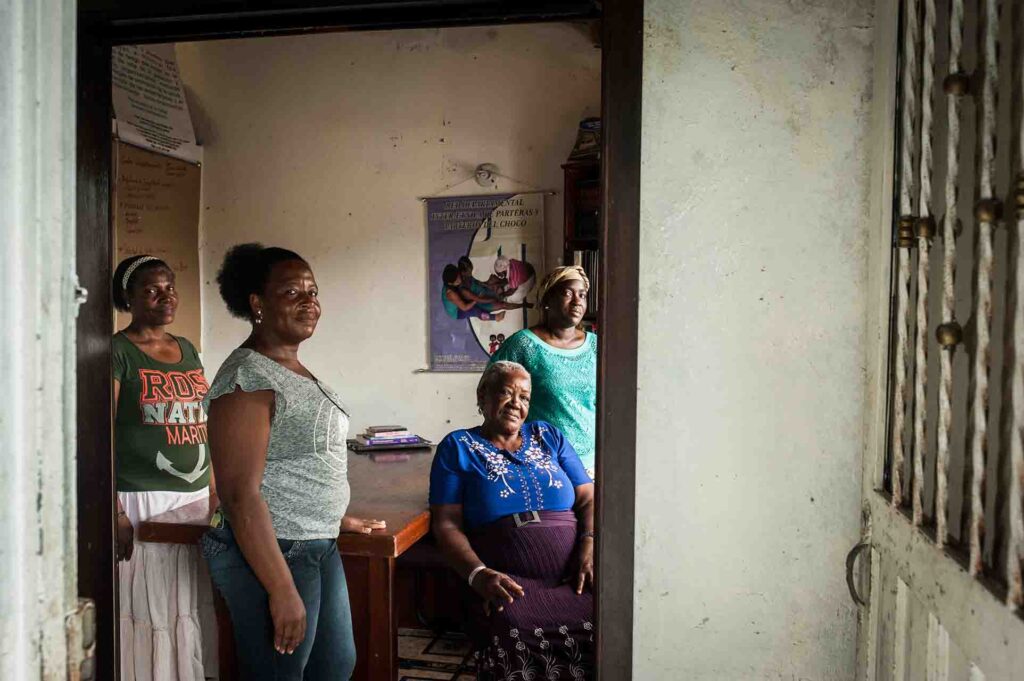 The women working towards Chocó’s future

In photos: Afro-Colombian women in Chocó work to transform their community

Story and photos by Kholood Eid

While Colombia continues navigating the path to peace after over five decades of conflict, the consequences of war and lack of government resources continue to disproportionately affect Afro-Colombian and indigenous communities, many of whom reside in the Colombian department of Chocó. Over half of the population in Chocó is internally displaced and it remains one of the poorest and most dangerous regions of Colombia. According to the United States Institute of Peace, the number of internally displaced people (IDP) registered with the Colombian government surpasses 6 million, giving Colombia the largest IDP population in the world after Syria. About 58 percent of these IDPs are female.

The challenges that Afro-Colombian women face are unique in that they span from sexual violence and high unemployment rates, to a lack of opportunities for youth advancement and representation in the mainstream media.

Among these women are individuals looking to embrace roles beyond those specified in the peace accord with the FARC—roles that promote resilience through healing, growth, and nourishing a positive collective identity within their own communities. Groups like Ruta Pacifica, a coalition of women that is working for peace in Colombia, are vocal against war and gender-based violence, and Cocomacia, a community council for the Atrato region, both include a gender committees that seek out ways to create financial opportunities for women in the region.

I went to Chocó in 2017 through an International Women’s Media Foundation (IWMF) reporting fellowship to pursue a project under the theme “women, peace, and security.” I chose to explore the efforts these Afro-Colombian women were pursuing in order to address issues specific to their community—initiatives resulting in something between a reckoning with the past and laying the foundation for what’s to come.

*The following interview excerpts have been translated and lightly edited for clarity.

Juana and her daughter are both survivors of sexual assault. She also lost two sons to violence.

“The Memory Work I did was with the Ruta Pacífica [Peaceful Route].
We worked with 100 women here in Chocó telling their stories.

When I did that work, I cried a lot because I thought no one else went through what happened to me and I realized that some other women had gone through worse things.”

Juana, a local community leader, was kidnapped in 2007 after her son was elected mayor of Tangui.

Luz Romaña Cuesta is originally from Carmen del Darién but now lives in Quibdó, and makes dolls that reflect Afro-Colombian and indigenous people.

“With the [financial] support from these dolls, we educate our children. Some have gone to high school, but we haven’t been able to afford to pay for them to go to university. We support our families with the dolls and we also pay our bills with them.”

Ana Rosa Heredia is an activist and part of Cocomacia, the community council for the Atrato region. She works at a restaurant, which is owned by Cocomacia and is part of a gender equality initiative.

“She wanted us to create an 'area for women' because, until that point, the ones that worked were always the men—the men and not us. So she said we have to claim what belongs to us, our rights as women to live here.”

This is Carmenza. She is a dance teacher at a local university in Quibdó.

A survivor of sexual violence, she teaches dance as a form of therapy to young girls who have suffered abuse.

“I pass all my power onto others and I see how those others empower themselves. It feels like an amazing mirror—looking at myself reflected in those stories, in other lives, in their bodies, their movements.”

Velia Vidal Romero is a communicator who travels throughout the Chocó region promoting literacy through reading clubs and workshops for women and children.

“The history is in the books but us — Afro and Indigenous people — have been caged in oral history. That oral history is really important but it’s been a way of taking us out of the texts.”

Yirleiny Moreno Valoyes is a former model and the Director of the Corporación para la Belleza Integral de la Mujer Chocoana [Corporation for Integral Beauty of the Woman from Chocó].

“Beyond doing the work for the girls to be beauty queens and teaching them to be proud of their physical characteristics, I realized that there was an underlying structural problem. That the poverty situation here, which didn’t necessarily come out of the general conflict, came out of us being discriminated against throughout history.”

Ifigenia Garcés Urrutia is an actress who teaches theater to young people in Quibdó.

“No matter how hurt she is physically or emotionally, a woman has to be taken care of like flower that needs to be watered again, that needs new soil and kisses in her soul."

“She has to rebuild her self-esteem; and these artists should tell her to keep going and be the mother of the children she has left … to tell them that their bodies are valuable even if they were sexually assaulted, that they have value and they can find a man that loves them someday. But it is a very important task that will take more than just a couple of days because it is women who have all that weight on their backs.”

"We can't allow these women to collapse because the majority of them are single mothers, and through art they can be reborn. Letting them collapse can't be an option for an artist that understands [this situation] and knows how to handle it. In this territory I take it as an obligation, as my religion, to give that part of me--the same girl that has been a victim of violence."