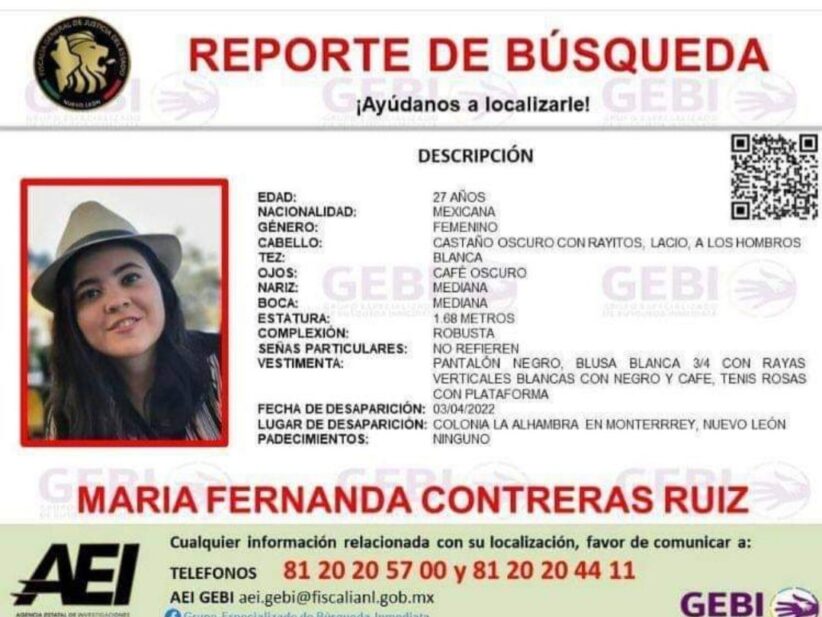 On the night of April 3, Maria Fernanda Contreras texted her mother for the last time, letting her know she was on her way home after meeting a former co-worker; just after that, the 27-year-old went missing.

Concerned over Ms. Contreras’ well-being, her family started looking for her in her home city of Monterrey, providing authorities with information they could find but not receiving much help from the police.

Ms. Contreras’ disappearance is far from an isolated case in Mexico. In Monterrey alone 199 people went missing in the first months of 2022, 62 of which are women who have yet to be found.

Violence against women in Mexico is a well-known reality. According to the UN Committee on Enforced Disappearances’ latest report on Mexico, 748 women have disappeared in 2022, an average of seven women each day so far this year.

Disappearances and femicides in the country have sparked outrage amongst Mexicans tired of the violence, and many blame authorities which appear to be indifferent about the problem.

Hugo Contreras, Ms. Contreras’ father, immediately sought to look for his daughter the morning after her disappearance, alerting the authorities where her phone’s last recorded location was. Mr. Contreras staked out the address of her last whereabouts for 24 hours, expecting the authorities to assist him to no avail.

Authorities disregarded Mr. Contreras’ pleas and reportedly ignored evidence related to the phone’s location. After three days, the authorities finally found Ms. Contreras’ body, which had signs of violence,  inside a residence in the same area where the phone was allegedly last tracked.

In Monterrey, where 24 women have been reported missing in the last 30 days, Governor Samuel Garcia downplayed the authorities’ role in the recent wave of gender violence in his state by saying that women have gone missing in Nuevo Leon because of “mental health problems.”

However, data shows that femicides in the country have been on the rise. In 2021, Mexico reported 977 femicides, increasing the 949 registered in 2020. For the first months of 2022, the reported femicides amounted to 155 as of February 28.

According to the latest study from The Network for Children’s Rights in Mexico (REDMI), girls appear to be most affected by disappearances amongst minors.

Since the beginning of President Andrés Manuel López Obrador administration in 2018, around 14 children have gone missing each day in Mexico, totaling 19,445 minors reported missing over three years, of which 55.26% were young girls.