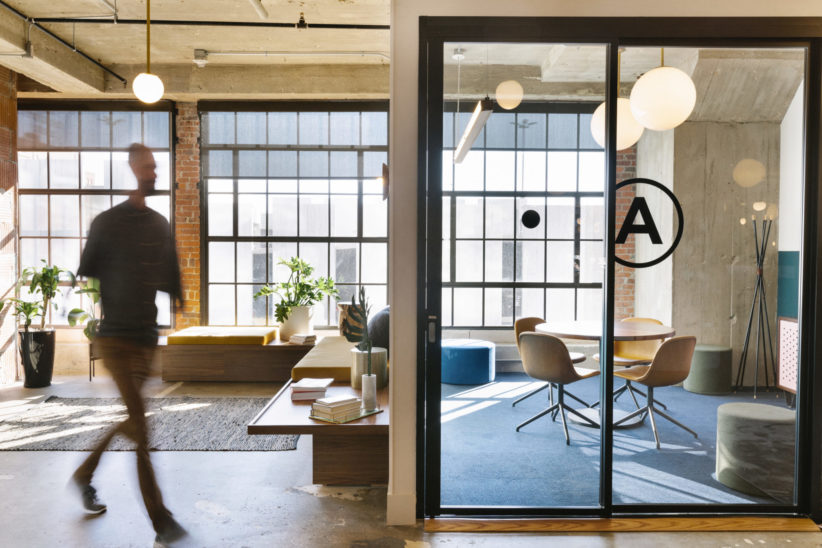 It was from the 41st floor where I looked down at a bird’s eye view of one of Mexico’s most renowned monuments. The Angel de la Independencia attracts dozens of tourists a day and is at the center of a bustling roundabout in the heart of Mexico City.

Almost at the top of one of the capital’s tallest skyscrapers, a signature smog lingered over Mexico City.

To the faint tapping of keyboards and hangout meetings, I wondered for a moment how many people have had the chance to see the monument from this breathtaking perspective, and the panoramic city beyond. Not many I’d assume, unless you were one of the many entrepreneurs, startups and developers that have taken over this building.

WeWork Reforma Latino offers 360 degree views of Mexico City from its sky lobby and is the second building that the coworking conglomerate has opened in the capital. It is one of 667 coworking spaces across 117 cities that WeWork has launched in the past few years, encouraging startups, creatives, developers and entrepreneurs to brush shoulders in hip-looking offices with modern interior designs.

Sipping coffee while overlooking the capital was inspiring, even more so talking to other remote-working twentysomethings and being challenged to games of table tennis because that’s how work days are meant to be.

Seven Latin American countries now have WeWork offices and Panama is next.

Selina Hostels, which boast their own coworking offices, have been launched by Israeli founders Daniel Rudasevski and Rafi Muserifa across the continent. From their locations, digital nomads can not only work in cities, but also on beaches and other luxury destinations. They recently raised US$100 million in funding which will go towards meeting the target of 400 properties by 2023.

Coworking Resources, a publication targeted towards coworking space owners, recently projected that in a few short years the number of coworking spaces worldwide will surpass 20,000. This upward trend  is also taking shape in Latin America. The rise of remote work and the benefit of lower living costs led to a need for coworking spaces with good internet and desk space at a fraction of the cost of hubs in San Francisco or Berlin.

The result is an entrepreneurial vision where international and local laptop workers are able to share desk spaces and ideas.

An increasing number of people are looking to professionally succeed while doing it independently, the co-founder of Unsettled, Jonathan Kalan, recently told Latin America Reports. Kalan used coworking spaces across the globe before launching Unsettled, which offers creatives and entrepreneurs the chance to work from international locations and be part of immersive, local experiences.

‘‘Every co-working space that I’ve been to in Latin America has been totally full and they’re often scrambling to expand and so I think there is a huge market there,’’ Kalan explained. ‘‘I think we’re going to see the number of coworking spaces across Latin America grow in the next couple of years to meet the market of independent freelancers and entrepreneurs who are looking for a space to create.’’

Condensing an ecosystem into a coworking space can also benefit the surrounding community.

According to WeWork, 64% of Rio De Janeiro members also use the local cafes and eateries surrounding the building. Similarly, 73% of WeWork members in Mexico City are in the innovation economy, a term which refers to a newer economic idea of development and research rather than manufacturing.

Increasing rent costs also follow the re-development of a startup ecosystem. Although there are many reasons why the luxurious neighbourhood of El Poblado has become a sought after area in Medellin, it also boasts an abundance of well-connected cafes and over four co-working spaces. According to the New York Times, rent in this area rose more than 15%, just in 2016.

Another caveat that comes alongside coworking spaces across the world is the cost of access. There are usually a number of pay packages which allow users to rent an office on a monthly or weekly basis, as well as the ability to rent just desk space. Yet they can be costly.

Whereas an apartment can cost anywhere upwards of 3000 Mexican pesos (MXN), which is roughly $157 USD in the beach town of Puerto Escondido, Mexico, it costs 2389 MXN for monthly access to Selina’s coworking space.

‘‘Even for a foreigner, they’re quite expensive,’’ Kalan explained. ‘‘I think vacation destinations on the coast like Puerto Escondido are very much catering to digital Nomads and remote workers from outside of the country and that won’t change,” he said. “But, for cities that have a lot of locals who are innovating and working independently, there could be something to bring the prices down a little.’’

Ole Heimdal is one of the co-founders of Flamingo Coworking, the first co-working space on the Carribean coast of Colombia. Speaking to Latin America Reports, he explained that though coworking spaces could generally be considered expensive for local entrepreneurs, access to his services is much cheaper than coworking offices in Europe or the US.

‘‘We are quite flexible when it comes to locals that want to come in and do workshops,’’ Heimdal continued, explaining that in addition to maintaining a coworking space they also have studio space available in the beachside town of Santa Marta.

The founder similarly refers to a combination of lower living costs in remote locations and travel opportunities that have led to coworking growth. Heimdal celebrates the global community that coworking spaces promote: ‘‘By having people come here [to use the coworking space] they can have a positive impact on the different environments in South America.’’

Though many independent coworking spaces like Sinergia in Uruguay or Bolivia Tech Hub in La Paz cater more towards a local entrepreneur demographic, large conglomerates such as We Work and Selina are fast encroaching on suitable office spaces around the globe.

Bolsonaro’s admission of weakness sparks discussions of his impeachment